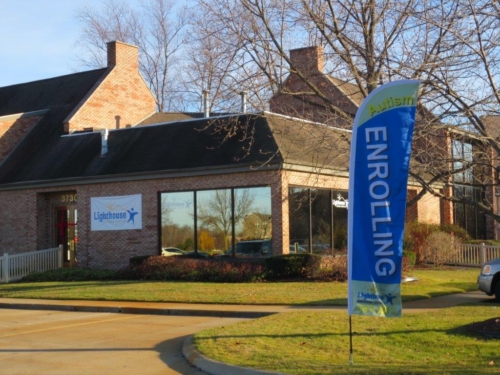 Welcome to Lighthouse – the Autism treatment leader in Indiana. We’re pleased to provide you with The Autism Beacon newsletter – a quarterly publication dedicated
to keeping you up to date with relevant news on Autism and Autism Spectrum Disorders
and extending information on the available resources at our Mishawaka and Warsaw centers for your patients in need. Lighthouse is 100% focused on Autism and, specifically, Applied Behavior Analysis (ABA) – the only therapy that has been vetted by the medical and higher education communities. ABA therapy is endorsed by the U.S. Surgeon General as an approach to teaching social, motor, and verbal behaviors as well as reasoning skills. Over 30 years of research has proven ABA to result in very positive outcomes when used as an early-intervention tool for Autism. Lighthouse is the only center in Michiana with an award-winning management team who are also parents to a child with Autism. Gregg Maggioli, Executive Director, and wife, Sandy, founded Lighthouse because they understand the frustration and feeling of helplessness when parents are told their child has Autism. “Lighthouse cares for children and their parents as though they are part of its extended family – this is the type of environment we experienced with our son in Carmel, Indiana. As time went on, we discovered an unmet need in this area and are now exceedingly proud and fulfilled to provide the same foundation for kids in this community,” said Gregg Maggioli, Executive Director. “Our therapists love, care for, and find joy in each one of the children. No one cares about the kids and their families as much as Lighthouse. We are dedicated to providing the best therapy while addressing the needs of the family as well.”

SALT LAKE CITY (April 3, 2014) — — Gov. Gary Herbert today signed legislation making Utah the 35th state to enact autism insurance reform. Utah has one of the nation’s highest rates of prevalence for autism at 1 in 54, or about 2 percent of the state population.

Sen. Brian Shiozawa (at the podium) and Governor Herbert

Sponsored by Sen. Brian Shiozowa, the bill (SB.57) was fiercely opposed by the insurance industry. The enactment of the law culminated six years of effort by the Utah Autism Coalition, providers and families to end insurance company discrimination against people with autism.

“Autism Speaks commends Senator Brian Shiozawa for his leadership in delivering for the Utah autism community,” said Mike Wasmer, Autism Speaks’ associate director of state government affairs. “The Utah Autism Coalition has fought hard to make this day happen and we were proud to be their partner.”

On Saturday, April 26 from 10:00am-12:00pm, ADEC will be hosting an Autism Awareness event in downtown Elkhart. There will activities for children, a sensory table, coffee and donuts. The ADEC bell choir will also be there to perform. This event is a great opportunity for families to meet, network, and explore community resources. Lighthouse will also have a table there so stop on by and say hello!  For more information on the event you can click here to see the Light the Way 2014 flyer. 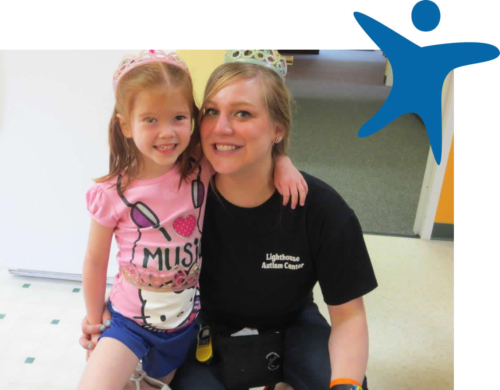 April 2014- Robert and Lisa Cook know how much of a blessing and beacon of              hope Lighthouse can be to parents struggling to connect with their Autistic child. Over the course of just one year, they’ve witnessed dramatic changes      in their daughter, Ally. “Before Lighthouse, we struggled to get Ally to connect with us.    She would only communicate to address her most basic wants and needs. She would rarely even let us sit next to her,” said Ally’s mother, Lisa Cook. “I am falling head over heels in love with her all over again. I am in heaven playing Barbies and dress up with her! These are all things a year ago I would have never dreamed we’d be able to dotogether. We have everyone at Lighthouse to thank for that. This is the first environment where we have seen her thrive and where she has been really happy.” The staff at Lighthouse recognizes that all children, regardless of Autism, learn at their own pace. Intervention goals vary person to person depending on age, level of functioning, family goals, and other factors. We all agree, however, that we’ve seen incredible results from Ally.

Is your toddler repetitive?
Could be Autism. Study warns.
April 2014- The Journal of Child Psychiatry and Psychology published a new paper that will make each parent sit up and observe their child’s behavior. The study, published by lead researcher Joseph Piven, found that children demonstrating repetitive behaviors like flapping hands, spinning, etc. by their first birthday are four times more likely to have autism than
children who don’t do such repetitive actions. The study adds weight to the theory that repetitive behaviors might be a red flag for Autism that all parents should watch out for. The study, conducted at the University of North Carolina at Chapel Hill, sends mixed signals, as repetitive actions like babbling syllables and wiggling arms are often the
first developmental milestones that children show. Distinguishing them from behaviors that point towards Autism might need sharper observation and definitely more research.